Read about how HIQA’s HTA team is supporting NPHET in its response to COVID-19. 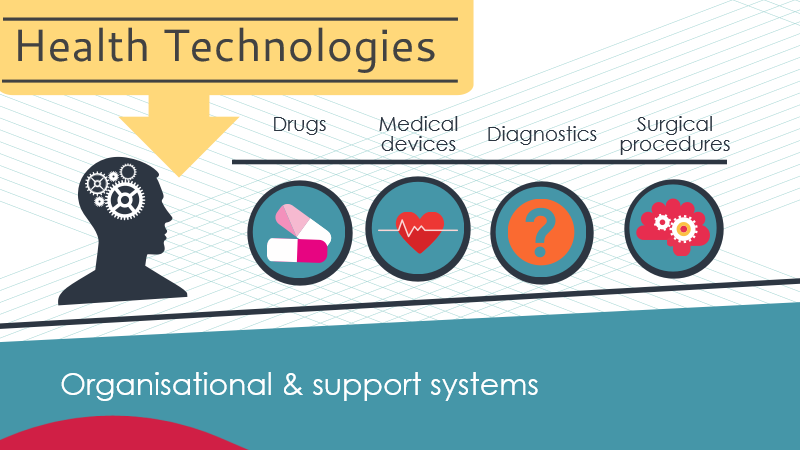 The health budget in Ireland is finite. To invest in a new technology means that it may be necessary to stop or reduce funding for another technology or service. To make that choice, it is important that accurate and reliable evidence is presented to support decision-making. The goal of HTA is to provide that independent evidence.

The Guide to Health Technology Assessment at HIQA provides an overview of what HTA is and how it is conducted by HIQA. It explains what information is considered in a HTA and how that information is used to produce advice to ensure that investment and disinvestment decisions are well informed and evidence-based. It also outlines what the outcomes of the HTA process are and how HTA is used in decision-making.

HIQA develops national HTA guidelines to promote the production of assessments that are timely, reliable, consistent and relevant to the needs of decision-makers and key stakeholders.

To advise it on the development of guidelines in Health Technology Assessment.This group has been actively involved in guidelines developed to date, and will continue to assist in future activities.

The HTA Scientific Advisory Group has broad representation from key stakeholders and includes methodological experts in HTA. Details of Group membership are provided.

The Group has broad representation from key stakeholders.

Strategic participation and collaboration in European and International HTA networks ensures we continue to optimise our approach to HTA.

EUnetHTA (European network of HTA) is a collaboration of 79 HTA organisations from all 28 EC member states, Norway and Switzerland. HIQA has represented Ireland in EUnetHTA since 2007. EUnetHTA aims to support effective and sustainable HTA collaboration by increasing efficiency and quality of joint work. HIQA is actively participating in four work packages of the EUnetHTA Joint Action 3 (2016 to 2020). In October 2016, HIQA’s Director of HTA was elected Chair of the EUnetHTA Assembly which is responsible for setting strategy and monitoring attainment of objectives.

HTAN is a permanent network of HTA agencies which was established by the European Commission. Ireland is represented by HIQA’s Director of HTA in this network. HTAN aims to foster sustained strategic and scientific collaboration in HTA across the EU. The HTA Director was also invited to join an EC Expert Group on assessing the impact of a sustainable mechanism for EU co-operation in HTA from 2020 onwards.

HTAi is the global scientific and professional society for those who produce, use, or encounter HTA. It has members from over 65 countries and includes researchers, agencies (including HIQA), policy makers, industry, academia, health service providers, and patients/consumers. HIQA hosted the annual scientific meeting of HTAi in Dublin in June 2010 which was attended by over 1,200 delegates.

INAHTA (International Network of Agencies in HTA) is a collaboration of 52 HTA agencies, including HIQA, from 33 countries around the world. The network aims to accelerate exchange and collaboration among agencies and promotes information sharing to prevent duplication of activities.

HTG (Head of Agencies Group) is a network of Health Technology Assessment Agencies across the European Union. The group is a HTA-focused collaborative network for high level strategic exchange and discussion. It has a keen focus on supporting the development of joint HTA at an EU level and advising policy-makers and relevant EU and national institutions on matters regarding HTA, particularly cooperation in HTA.